What is Autism? It is a developmental disorder that appears in the first three years of life and affects the brain’s normal development of social and communication skills. It is a physical condition linked to abnormal biology and chemistry in the brain. Why is a Puzzle Piece used as the symbol for Autism? The Puzzle Piece symbol reflects the mystery and complexity of Autism Spectrum Disorder (ASD). Since every puzzle piece is different in some way, a puzzle piece accurately represents the diversity of the individuals affected.

It is estimated that approximately 13,000 families are affected by Autism (according to WHO statistics crediting 1% of the country’s current population). When a child is diagnosed on the autism spectrum, he/she requires 20 to 40 hours of therapy per week but the Autistic Society can offer up to two hours per week. Therefore the majority of families cannot access appropriate and affordable education for their children in their communities.

For Prestige Holdings Limited, the pieces of the puzzle started being assimilated long before the month of April 2017, in an effort to culminate into a complete picture devoted to one sole cause – increasing Autism Awareness in Trinidad. The company, with all of its brands KFC, Pizza Hut, TGI Fridays, Subway and Starbucks, which are loved throughout the country, embarked on a journey to promote Autism Awareness by partnering with the Right Start For Autism, a partnership journey which began in 2014.

The Media Launch was held on World Autism Day – Sunday 2nd April at Price Plaza complex where restaurants for all five brands exist on the compound. The Media Launch showcased the official ‘Light It Up Blue’ plug-in ceremony for the Prestige Holdings Limited restaurants. This year, Ian Alvarez aka Bunji Garlin and his wife Fay-Ann Lyons-Alvarez, joined the Prestige Holdings Limited family to ‘Light It Up Blue’ with CEO Charles Pashley and their Right Start For Autism partners.

Flagship restaurants under the Prestige Holdings Limited portfolio were all lighted up blue on World Autism Awareness Day, casting a light on Autism in Trinidad and Tobago and evoking dispersion on indifference, intolerance and misunderstanding associated with Autism.

‘Light It Up Blue’ is a worldwide initiative where buildings from all continents deviate from their standardised brand related colours or neutral lights for one night, to serve as beaming beacons of blue light, bringing attention to this cause. So did 21 of the Prestige Holdings Limited restaurants at their various locations, be it at the MovieTowne Malls, SouthPark Mall or the miscellaneous locations throughout our country.

At the Media Launch, along with specially invited guests and media personnel, members of the public, the company’s Marketing team, the Right Start For Autism Group including director and co-founder Donella Rodriguez Laird, there were two esteemed artists – Lee Anthony Aleong and Tracy Chan. These artists were painting ‘live’ murals during the event, to depict their interpretation of the unveiled theme for 2017: ‘DIFFERENT IS BEAUTIFUL’. Guests were also invited to join in to leave their personal mark for Autism Awareness during the event, by participating in a mural open to the public by way of painting, handprints and finger-painting on a sole canvas devoted to this. These murals have been scheduled to be on display at flagship restaurants of all five brands during April – Autism Awareness Month. Prestige Holdings Limited also presented a cheque to the Right Start For Autism Group, as no corporate social responsibility initiative would be complete without the company’s commitment to financially contribute to this cause. A special social media video message was released at the event, highlighting some signs of Autism in children, in an effort to sensitise the public to these indicators. The video featured employees of Prestige Holdings Limited, as well as local celebrities who united with the company to drive this cause. It can be viewed and shared from the social media pages (Facebook and Instagram) of all the Prestige Holdings Limited brands and throughout the country on digital billboards.

The support for Autism Awareness continues. Employees of all five brands can be seen wearing Autism Awareness pins on their uniforms. On certain days, some employees can be seen sporting T-shirts branded with a special design of artwork interpretation for the theme ‘Different Is Beautiful’. These are the winning designs of a T-shirt competition held amongst all brands that were also showcased during the company’s first ever Fashion Show for Autism Awareness. At the restaurants, there are dispensers with pamphlets containing a wealth of information about Autism available to the public. The murals painted during the Media Launch, featuring a creative interpretation of artwork capturing the theme ‘Different Is Beautiful’, are also on display at Flagship restaurants. KFC meal boxes are branded with puzzle pieces and Autism ribbons and the Kid’s Pack contains a puzzle devoted to Autism Awareness.

For more than 40 years, Prestige Holdings Limited has been, “Helping People Taste Happiness Every Day.” The devotion to Autism Awareness is just another way that the company is delivering on their promise.

For more information on Autism Awareness please visit the Facebook page for Right Start For Autism. 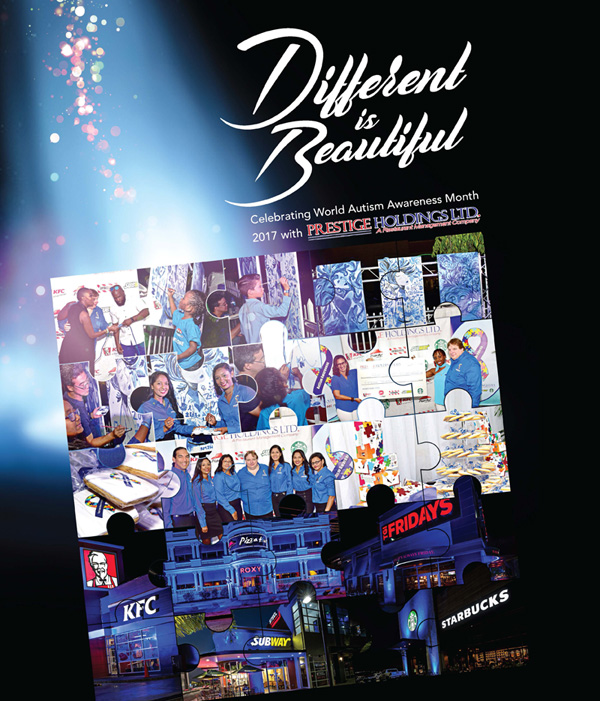 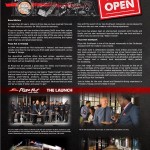 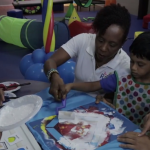